by TheNewsGuy 5 years ago5 years ago
20views
0
6 shares

UNIQLO clothes are simple, made better–highly finished elements of style in clothes that suit your values wherever you live. This unique concept of clothes sets the brand apart from apparel companies whose sole purpose is the pursuit of fashion trends.

UNIQLO is the leading apparel brand in the world that has always been true to its vision of making clothes that are made for all, going beyond age, gender, occupation, ethnicity and all other ways that define people. Its clothes are simple yet essential and universal that consumers can freely combine to create their own style.

For the past three years, UNIQLO has carved a unique niche among the hearts of consumers in the country since it opened its first store on June 15, 2012, at the SM Mall of Asia, with a second branch at the country’s second largest shopping mall, the SM City North EDSA, soon after. The third store was opened at the SM Aura Premier and its fourth store at the SM City Pampanga. After a year, UNIQLO had opened two more stores—SM City Fairview and Glorietta, marking UNIQLO’s first anniversary in the Philippines. All in all, UNIQLO has 23 stores across Luzon with expansions being eyed in other parts of the country.

So, can clothing change the world? UNIQLO not only believes it can. It is already doing it. One such initiative, in time for the global brand’s third anniversary in the country, is the “UT You Talk” campaign culminating today, where consumers were given the chance to make powerful statements about their personal style in their own creative ways.

The star of the campaign is, of course, the UT shirt, whose philosophy is: “A UT is more than just a T-shirt. It’s an expression of who you are. Where you’ve been, what you love. And with hundreds of limited-edition T-shirts to choose from each year, you’ll always find one that says exactly what you feel.”

“We’re proud of this year’s UT Collaboration line-up. And we’re also always very thankful for the Filipino customers who find our clothes very relevant to their everyday lives. This is for our 3rd year anniversary celebration, we have a lot in store for the Philippines” says Katsumi Kubota of Fast Retailing Philippines Inc.

Uniqlo also collaborates with home-grown brand Jollibee to express one’s happiness via a T-shirt that declares Joy Fits All.  These collaboration shirts will be available in all UNIQLO stores starting June 1.Aside from Jollibee, San Miguel Beer shirts will also be available to the market soon. To find out more updates about UNIQLO and the SPECIAL ANNIVERSARY PROMOTIONS from May 29-31, you may visit www.uniqlo.com/ph. 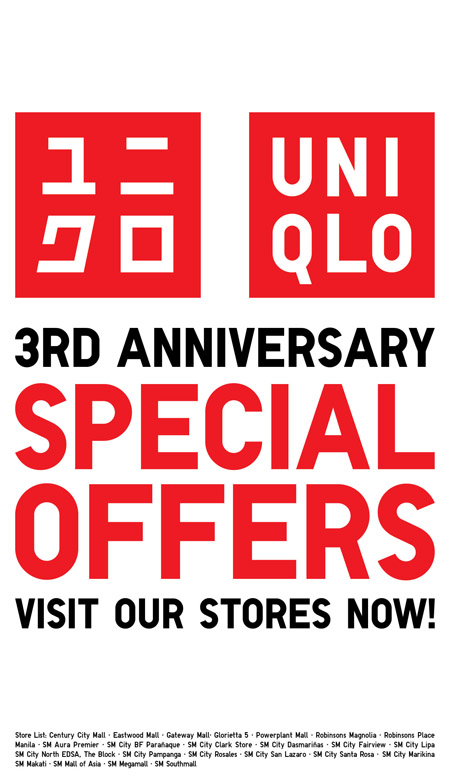